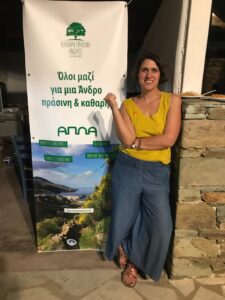 The Andros Experience 2021 Sports Event took place between June 11th and 13th on Andros, and the team behind Clean Green Andros was there!
On Friday, June 11, the project also participated in a Cyclades Preservation Fund (CPF) meeting arranged to inform people about the importance of protecting the Posidonia (the seagrass beds of the Cycladic seas). Also participating were the Mayor of Andros, representatives of Andros Port, local authorities and scientists from ELKETHE. At the meeting, we learned about the vital Posidonia, which, just like the Amazon of the Mediterranean, produces oxygen and protects the coasts from erosion. We also learnt that the Posidonia is threatened by trawling and mooring.
At the Andros Experience event on Saturday, June 12, in Gavrio, 200 portions of food were cooked and served to the athletes, volunteers, and participants. Andros Routes (sister project to Clean Green Andros) provided the reusable crockery, previously used at the two Andros on Foot Festivals.
Attending the event from Clean, Green Andros were Ulli Stahlmann and Katerina Pantazi and Annie Mitropoulou from CPF.
They promoted the initiative for a cleaner, greener Andros, leading the effort to reduce waste, use the correct bins for garbage, separate recyclables, and start composting. They also washed many dishes!
Thanks to the reusable crockery, the initiative prevented over 200 plastic plates from ending up in the trash. Finally, three recycling bags and one compost bag were collected. What was not recycled or composted – just a garbage bag! The efforts were worthwhile.

Warm thanks to Andros Experience 2021, the Municipality of Andros and the Cyclades Preservation Fund for their cooperation, the KTEL of Andros for transporting forgotten cutlery, the taxi driver George Mandarakas for transporting the banners, Dimitris Petsas for supplying the recycling bins, the restaurant Karavostasi that allowed us to use its kitchen for dishwashing, and SEDA for the transport of reusable crockery back to the store.
Stay tuned for the next actions. 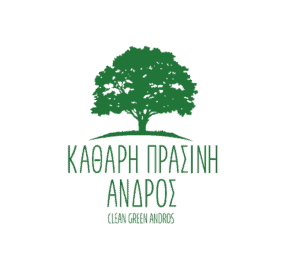 The Clean Green Andros Project is supported by the Cyclades Preservation Fund www.cycladespreservationfund.org