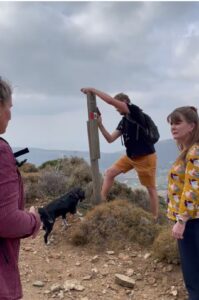 Last week, the Andros Research Center (ARC) hosted three representatives of the British Embassy from Athens and of Cyclades Preservation Fund on the island of Andros. The visit was part of the Cyclades Green Volunteers program. This initiative has brought four volunteers to Andros and has contributed significantly to the Andros Routes and Clean Green projects. 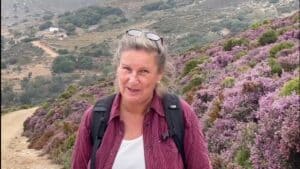 Volunteer Ulli Stahlmann, a member of the ARC coordination team, welcomed the visitors and presented the organization and the projects:  Andros Routes and Clean Green Andros. They met two British volunteers who had chosen Andros to provide their generous assistance. Lizzie and Russell had been busy maintaining the Andros trails. 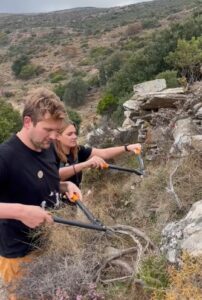 After the introductions, the group headed for a short hike to path 15A,  a lovely walk near Gavrio, the Andros port. Here, they saw first-hand the efforts required to maintain and enhance the ancient paths, with activities such as painting signposts, cleaning and renovating steps, and pruning the vegetation. 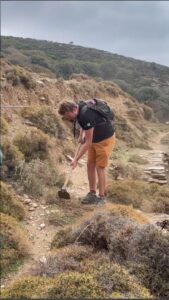 The Embassy representatives were interested to learn more about the two projects; the certification of the trails, the volunteering institution (the Route Angels), the maintenance hikes,  the plastic pollution issues,  the waste management problems, the Drink Andros Water campaign, and the involvement of both residents and cultural associations in the maintenance and promotion of trails. Ulli highlighted the importance of volunteers in supporting the work of the organization.

The meeting ended with the three visitors saying that they would like to return to Andros again, to walk on the paths and take part in one of the regular maintenance hikes.

The Cyclades Green Volunteers program is an initiative of the Cyclades Preservation Fund with the support of the British Embassy Athens. From September until today, four volunteers have offered their time and effort on Andros and another two volunteers are working remotely on digital initiatives.